Prior to the Age of Obscurity, knowledge of the worlds and dimensions that make up the omniverse flourished. Dim Alpha's Great Bibliothecum dyiH Eridug housed a copy of every document ever created. The hoi polloi learned not only to read, but to employ critical thinking and reasoning to what they read. The result was that the Tenebrae (a group of wealthy and influential folk believed to pull the strings of figurehead rulers) launched a violent campaign to obliterate the documents at Eridug. The loss of the scrolls of Sapientiae, as the works have been called, is considered to be a greater disaster than the cataclysm that ended the Mesozoic era of dinosaurs.

During the Bibliothecum raid, the bibliothecaries were rounded up and removed from the premises in preparation of the building being burned to cinders. Bibliothecary Sophia the Erudite grabbed the oldest and most important scroll in the library and dashed through the winding corridors of the building, barely staying one step ahead of the militia. Pursued up into a tower as the library began to burn, she barricaded herself in a translator's bedchamber. It took only seconds for the militia to start hacking at the door with an axe. The Tenebrae's general called to Sophia from the other side of the disintegrating door. He urged her to come quietly as the other librarians had. Should she refuse, he would let his soldiers have their way with her.

Fingers trembling as the door broke apart, she grabbed a cryptex off the desk and locked the scroll in it, endeavoring to hide it up her sleeve.

He merely chuckled. "How can you spew such nonsense when even now the scrolls burn?"

"And what is faith compared to steel and flame?" he said, nodding back toward his soldiers who held a sword in one hand, a torch in the other. "Your faith can save neither you nor your precious knowledge." He turned and walked out, calling, "Torch the room. Do with her as you wish." 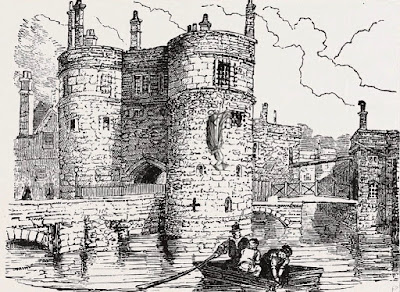 Just as a sneering solder reached to grab her, she leaped out the tower window, landing on the rocky shore below.

A pair of fisherman who witnessed her leap scrambled to her side.

She held up the cryptex. "Keep it safe," she garbled, choking on blood.

"What is it?" one of the fishermen asked.

"The answer to what?" they asked.

"No time," she rasped. "Take down these numbers. They unlock the cryptex."

Just as she spoke the final number in the code, the life went out of her eyes. A garrison of militia stormed out of the building in the direction of the skiff. The fishermen lifted Sophia and the cryptex into the boat and rowed away frantically.

"Quick! They're escaping!" the sneering soldier called out, and the tower thundered with the sound of boots rushing down the stone stairwell.

The garrison on the ground rushed toward the shore. Had the militia had spears or arrows instead of swords, the fishermen would have been easy targets. "We'll find you ... and your families!" the general called as they fishermen rowed by.

Once well out of sight of the militia, the fishermen tried the code on the cryptex. It opened. They carefully unrolled the scroll, but being as the message was written in ancient Naturim, they were unable to make out the words or their meaning.

"Whatever this scroll says can't fall into the Tenebrae's hands," one of the fishermen, Phidelio, said. "Sophia was right. We must keep it safe."

"But how can we do that if we can't even keep ourselves safe?" his partner, Fortis, said. "You heard that general threaten us and our families."

They quickly made their way back home, gathered up their possessions and their loved ones, and rowed to a grotto long rumored to be ruled by magic. Being more than a day's journey, the fishermen and their families went ashore at sunset to make camp for the night and cremate Sophia's body. Later, as they slept, they were set upon by a band of five armed brigands.

Like all the fishermen in their realm, Phidelio and Fortis were characteristically meek and passive. It had long been a joke in the land that if a fisherman were ever attacked, he would do nothing more than flop around like a fish. But tasked with the welfare of both the cryptex and their loved ones, Phidelio and Fortis summoned courage and strength they never knew they possessed, trouncing the brigands with their bare hands. After being buffeted, the brigands scurried away in fear, mumbling about the fearsome fighting fishermen as Phidelio and Fortis came to be known.

The next morning, armed with the brigands weapons and newfound confidence, the fishermen and families got back in their skiffs and made their way to the grotto. "This is the place they say is a portal to another world," Fortis said.

"No turning back now," Phidelio said, tying a rope around his waist. "For all we know the brigands reported us to the constabulary. I'll go through the grotto first. If all's well on the other side, I'll tug on the rope."

"How will I know it's you doing the tugging?" Fortis asked.

"I shall tug thrice then twice then thrice again." Tucking the cryptex down deep inside the pocket of his tunic, a brigand sword hidden under the fabric on his hip, he stood erect and walked through.

Fortis tied the other end of the rope around a tree trunk. Seconds passed with nothing happening. Finally, Fortis felt the rope tug three times, two times, and three times again.

"He made it!" Fortis cheered.

The party all got through the portal intact, finding themselves in a strange world known as Dimension Q.

Word of Sophia's legendary leap spread through the dimensions, giving rise to the traditional observance of Saliolum (translated Leap Day). The Anglers of Sapientiae (as Fighting Fishermen Phidelio and Fortis preferred to be called) gained fame too, and they feared if their identities became known, the cryptex would be in danger of being taken. After several years of living as vagabonds, the anglers grew weary of being on the run.

Their combined five children now grown (Phidelio's two sons and daughter, plus Fortis' son and daughter), the fishermen sent the younger generation away with the cryptex and instructions to keep both the artifact and their identities under wraps. Knights bearing a symbol of a rose being the fashion at the time, the fishermen dubbed their offspring the Knaights of the Firmament, their sigil bearing a five-petaled rosette, one petal for each of the children--the center of the rosette containing the symbol of the omniverse--a symbol unrecognized by those in Dimension Q who by and large believed their planet was the center of the universe and that there were only three dimensions: height, width, and depth.

Over the intervening centuries, the Saliolum holiday fell out of fashion, and the expensive Cryptex Crusades were called off. Now and then, searches for the cryptex have been initiated, all eventually abandoned as fruitless. It appeared the last scroll of Sapientiae had been lost. That is until ...

A week ago, Rosa, a Dim Q graduate student who'd learned of Sophia's tale while researching the Bibliothecum dyiH Erudig, found herself in possession of the cryptex without knowledge of how to open it. Hers is a story in and of itself, but the upshot is, in her attempts to unlock the cryptex, she turned one of the numbered rings and something clicked. Putting the cryptex to her ear, she found the cryptex was ticking softly.

That can't be good. 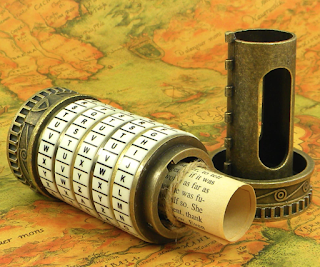 Rosa tried every combination she could think of, spinning the the various numbered rings. None of the combinations unlocked the box. Returning to the library at school she looked up everything she could find on ancient cryptices, comparing hers to what she read. As with all cryptices of the era, hers was stamped with numbers on one end:

She recognized the symbols as being the number 21 in the ancient language Naturim. Reading on, she learned that the number on the end of a cryptex refers to the number of days the cryptex has from the time it's activated until it self-destructs.

The next morning, Rosa put out a plea on the nethernet (the nether regions of the web that exist in shadow), asking for help in unlocking the cryptex before it is destroyed and its message lost forever. That's where you come in. As of today, you have 13 days in which to find the code that opens the cylinder before its message is lost forever. Visit the 2 Feb QuestFest page to join us in person to crack the code, or the Online Options page to participate from home.

May you garner a valorous victory.